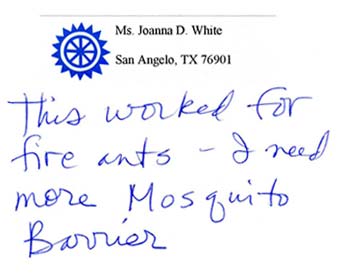 "...I've never seen anything work so fast in my life. They're outta here and I can't find 'em."
Marvin Crutcher, Lubbock, TX

"We had four really nice sized ant mounds out there yesterday and today they are absolutely gone.
You can't find one ant anywhere and before that they were thick as flies."
Mrs. C.W., Houston, TX

"I will not use poisons that can kill birds, dogs or possibly harm children. I am just not gonna do it.
That's why I use your stuff, it's cheap, it's quick, it's safe and best of all it works right now.
I don't know what else to say."
J.B., Greenville, MS

"Thank you! So far so great...no new ant mounds and we can sit by our pond without smacking away ants."
Sandra Anderson, Chippewa Falls, WI

"If we had more birds there wouldn't be a fire ant problem. Folks need to be careful how they use
pesticides and poisons."
W.A. Anderson, President, Save-The-Birds Organization

Mosquito Barrier is our very strong liquid garlic - so strong that four ounces in a gallon of water poured over the fire ant mound and they're gone within 24 hours. Out of your yard, out of your pasture. No poisons, no waiting, FAST. (To read an independent laboratory analysis showing just how strong our garlic is, click here.)

CAUTION ALERT:
Poisoned fire ant bait sprinkled on ant mounds can attract birds and kill them. Authorities advise whenever possible avoid using such baits and use a safer, alternative means of getting rid of fire ants.

HOW TO USE MOSQUITO BARRIER TO RID YOUR YARD OF FIRE ANTS:

The red imported fire ant (pictured above) arrived in the United States in the 1920's via boat, probably in Mobile, Alabama. Since that time it has spread principally from the Atlantic coast states, through the South and through to California and as far north as Kansas. In the U.S. it has no natural predators. It survives best in warm climates.

Some domestic red fire ants also exist in the U.S. but are not considered nearly as harmful or damaging to crops and animals as the very aggressive RIFA (red imported fire ant).

Red fire ants tend to build their nests in areas next to concrete, or other structures which might hold heat and help keep their underground nests warm. They also seem to shy away from building their nests near domestic red fire ants.

They have a queen which lays thousands of eggs continuously. Their nests may have as many as 500,000 fire ants. Bites from the ants can be extremely painful and sometimes fatal. The ants eat almost anything; grass, leaves, birds, dead animals including chickens, dogs, cats, rats and mice.

Their nests are normally quite visible and have obvious mounds of dirt piled up from their diggings. Most of their entrances (and there may be several) are not in the center of the mound, but on the sides of the mounds. Mounds may vary in size from one foot to three feet. A larger mound generally indicates a larger ant colony. The tunnels beneath the mounds may go as deep as four feet. It is pitch black in the tunnels and the ants communicate with each other by chemical exchanges and touch.

Poisons often take weeks, sometimes up to six weeks, to kill off a single colony. However, it is possible to immediately chase the red imported fire ants out of the area by using a garlic douse over their mound. One of the biggest objections we have to poisons is that the poisons are sprinkled around the mounds and are eaten by birds.

In tests we performed by our own staff, we used four ounces of Mosquito Barrier per gallon of water and poured the mixture over the mound. The next day the ants were nowhere to be found. We dug up the entire mound with shovels and could find no trace of any red imported fire ants. We conducted these tests many times - each time with the same result. No ants anywhere. In dozens of tests, after searching outwards from our doused mounds and finding no new colonies in all directions for nearly a quarter mile, we began to offer Mosquito Barrier for the purpose of red imported fire ant colony eradication. We have yet to have heard of any case where the ants did not abandon the site within 24 hours of dousing. Our method is all natural and environmentally sound.

No poisons were used and no damage was caused to any lawns or grass.

Over the years, we have noticed that yards which have been sprayed with Mosquito Barrier do not have any fire ant mounds. Spraying grassy yards with Mosquito Barrier eliminates fleas, chases ticks out and is not at all a place where fire ants wish to dwell. Generally, a once a month spraying is enough. In fact, our experience has shown that a once a month spraying of your yard will keep the fire ants from entering your yard in the first place.

Here is the exact formula we used, using our garlic product Mosquito Barrier:

For 1 foot diameter mounds use 1 gallon of water and mix in 8 ounces of Mosquito Barrier.

For 2 foot diameter mounds use 2 gallons of water and mix in 16 ounces of Mosquito Barrier.

For 3 foot diameter mounds use 3 gallons of water and mix in 24 ounces of Mosquito Barrier.

Stir the mixture well. If you don't have a measuring device, keep in mind a standard water glass usually holds about 8 ounces.

Use a shovel or large board to knock off the top of the mound. Pour the mixture into the newly exposed entranceways and over the portion of the mound that was scraped off. Do not spray the mounds, use a watering can with a built in spout or pour slowly from a bucket. The douse should be applied in the early morning when the ants are slow moving.

Each quart covers 1.25 acres, which is usually enough for a couple applications on smaller residential properties. 99.3% pure garlic extract. 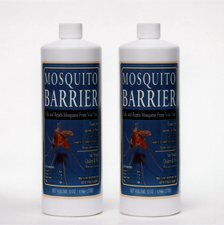 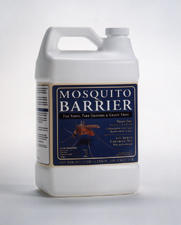 Gallon sizes are best for homes on a half acre for the entire season. One gallon covers 5 acres. 99.3% pure garlic extract. 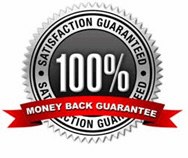 You can read some testimonials regarding Mosquito Barrier's effectiveness by clicking here.